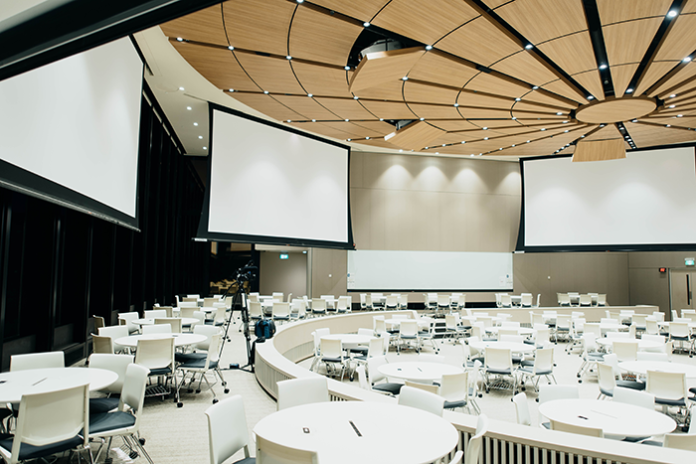 FORT LAUDERDALE—The U.S. Conference of Catholic Bishops (USCCB), gathering June 13-14 in Fort Lauderdale, for their annual Spring General Assembly heard reports today on a variety of topics including updates on the V National Encuentro of Hispanic/Latino Ministry and the Share the Journey campaign. The full body of bishops also heard presentations on the Synod on Young People, the Faith and Vocational Discernment, as well as World Youth Day taking place in 2019.

Bishop Nelson Pérez of Cleveland, Chairman of the USCCB’s Cultural Diversity Subcommittee on Hispanic Affairs, offered the bishops an update on the V National Encuentro, that will take place September 20-23 in Grapevine, Texas.

Under the theme of “Missionaries Disciples, Witnesses of God’s Love”, the V Encuentro will seek to establish ways in which the Catholic Church can respond to the Hispanic presence in parishes and promote the New Evangelization. It is also an opportunity to listen carefully to the needs, challenges and aspirations faced by the Hispanic population in everyday life.

In his presentation, Bishop Pérez recognized all who have been supporting and participating in the process of the V Encuentro over the past 18 months. The process has led to the celebration of 145 Diocesan Encuentros, as well as Encuentros in 14 episcopal regions, with the participation of over 100 bishops and more than 5,500 regional delegates.

The Bishops’ initiative has motivated unprecedented levels of engagement and already born much fruit in thousands of parishes, ecclesial movements and other Catholic organizations and institutions across the U.S.

Bishop Pérez also noted that more than 2,800 delegates and over 100 bishops are expected to attend the V National Encuentro gathering. The Apostolic Nuncio to the United States, Archbishop Christophe Pierre, along with Dr. Guzmán Carriquiry, Secretary of the Pontifical Commission for Latin America at the Vatican, will be in attendance. Bishop Juan Espinoza, General Secretary of CELAM (the Latin American Council of Episcopal Conferences), as well as representatives of more than 100 U.S. Catholic organizations are also anticipated to participate.

Share the Journey is a two-year, global campaign to build empathy and awareness on the plight of migrants and refugees through encounters and education. The campaign is managed by Caritas Internationalis and implemented by other Caritas members around the world. The first year of the campaign saw the launch of a new website in support of the campaign, more than 200 media stories and millions of impressions on social media sites.

Highlights of the second year of the campaign will include a virtual pilgrimage which will encourage people in their communities to walk a combined 24,900 miles, equivalent to one trip around the earth, as they share the journey with their brothers and sisters in need. Dioceses, parishes, universities, and schools will be asked to pray, walk, and bear public witness to our solidarity with migrants and refugees. Catholic leaders are encouraged to work in partnership with both interfaith and ecumenical groups.

Cardinal Joseph Tobin, C.Ss.R. Archbishop of Newark, Archbishop Charles Chaput O.F.M.Cap., of Philadelphia, and Bishop Frank Caggiano, of Bridgeport, also reported on the Synod on Young People, the Faith, and Vocational Discernment, including sending young adult delegates to the March 2018 Pre-Synod Gathering in Rome. The bishops also heard about plans for the international and stateside celebrations of World Youth Day in Panamá and across the USA in January 2019, as well as the visit of the WYD Cross and Marian Icon to several locations across the United States in August 2018.

The bishops also heard from the three young adult delegates from the Pre-Synod Gathering in Rome: Ms. Katie Prejean McGrady of Lake Charles, Louisiana; Mr. Nicholas López of Dallas, Texas; and Br. Javier Hansen, FSC, of the Lasallian Christian Brothers originally from northern California. The young adults shared their experience interacting with other young people from around the world at the Pre-Synod and meeting with Pope Francis. They also gave highlights from the Pre-Synod Summary Document on the needs and hopes of youth and young adults in the twenty-first century.

Bible Translation Within Reach of Millions of People Worldwide

Trump Sends $50M in Aid for Christians in Syria

November 5, 2019
You are going to send email to
Move Comment