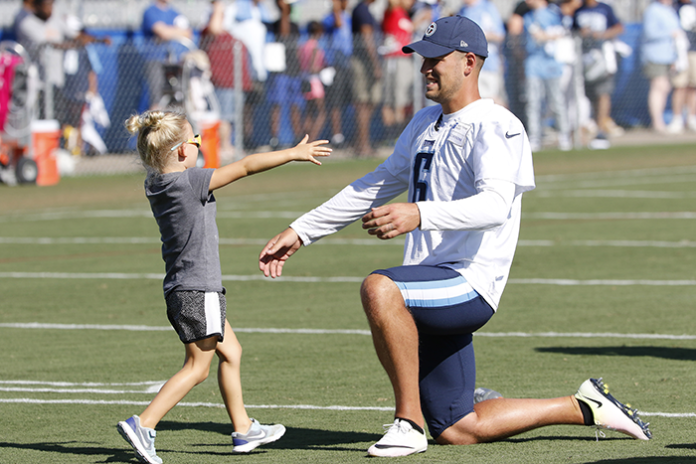 Tennessee Titans punter Brett Kern grew up in the suburban community of Grand Island, New York watching his father, and like most boys, young Brett longed to follow in his dad’s footsteps as a professional soccer player. His parents’ influence would end up going far deeper than his athletic aspirations.

“I thought I wanted to play professionally in Europe, but the Lord had different plans. My sophomore year in high school I ended up leaving soccer because I was burnt out,” Brett told me.

Noticing his obvious talent for years, Brett’s gym teachers, who also happened to be football coaches, begged him to come play football. He nor his mother were wild about the idea initially but in the tenth grade he made the switch and started kicking footballs instead of soccer balls. A scholarship to the University of Toledo proved his decision paid off in more ways than one. That’s where Brett met his beautiful wife.  He went from there to Denver and due to a coaching switch after his rookie year, he was released. He came here to Nashville and is now going on his tenth year in Music City.

I asked Brett when he started his Christian journey and he told me immediately about watching his father during his early years.

“I remember waking up in the morning and I’d go down and say hi to him. He would be in his office reading scripture. Seeing that growing up was huge.”

“I remember waking up in the morning and I’d go down and say hi to him. He would be in his office reading scripture. Seeing that growing up was huge.”

Brett spoke fondly of the way his parents ran the house and of the love for Jesus they instilled in him and his sister.

“My mom taught Bible studies and my dad was a deacon, so I had awesome parental role models.”

The early college years weren’t quite as easy for Brett. “Honestly, I really struggled when I got to college. I was on my own for the first time, apart from my family and the routine I had of going to church on Sundays and youth group on Wednesday nights. College was different. Just trying to fit in, trying to find yourself, make friends, new routines and now you’re exposed to the things of college, whether it’s girls or alcohol or anything like that. I really struggled.”

Brett was no stranger to the dangers of alcohol. Both of his paternal grandparents died of alcoholism. Until he accepted Christ at the age of twenty-six his own father struggled with it.

“There came to a point where I was at the bottom after a party one time. I looked at myself in the mirror and realized that this isn’t what the Lord has for me. This is not the road that he wanted me to take. The Holy Spirit was nudging on me to start fresh, to get back into church, and to find a solid mentor –  somebody older than me that could help me along with my walk.”

It has been a process from those early years until now Brett told me.

“The year before last was the first year I really tried to get in the word every day and I developed my relationship with him. I read through the Bible last year for the first time just to see everything the Lord has put in the Bible and the promises he has for us and the way that he communicates through his word on how to live a life that’s pleasing to him. It’s something that I hope – that I pray – I can leave for my kids.”

Brett’s journey has taken him on some adventures few have the privilege of ever experiencing. One such opportunity was being selected for this year’s Pro Bowl.

“When I found out I made it, I went through a lot of emotion.” Brett said.

“When I found out I made it, I went through a lot of emotion.”

He recalled the days his dad caught punts back in high school to the time in college when his fiance (now wife) helped him get ready for his pro workouts.

“We went through a bubble there in Toledo with no heat. It was forty degrees inside at nine o’clock  and she would be in there helping me catch punts and retrieve balls.”

He remembered all the hard work he’d put in for ten years just to get to that point. As great as the game was, the experience with his wife and three kids was even greater.

“My son had a blast hanging out at practice and in the locker room all week. My daughter who turned six this week got enjoy Disney and my two-year-old was just along for the ride. It was a blast to be able to go down there and just have fun as a family.”

Brett struggled with the Pro Bowl in the past thinking he might make it.

“I’m just thankful that God’s timing is perfect. Sometimes you feel like you deserve something, or you feel like you should be somewhere, or certain things should be going on but really, that’s not really any of our business. The Lord has full control of everything and it’s our job to trust in him and fully give things over to him. The Lord’s timing is perfect, and it was just a great week.”

Brett’s teammates praise him for his outstanding skill as an athlete but more than their regard his talent on the field was for his character both on and off it. When I shared this with Brett and mentioned his apparent humility, he responded.

“Humility is one thing my parents taught me. My dad really instilled it in me when I was younger. In looking at the examples in the Bible of Jesus performing miracles like feeding the five thousand it seems like a common theme was that he tried to get away. It wasn’t him boasting about it or saying, “Hey, look what I did.” He was the son of God and he could easily do it, but it was a common theme where he just kind of escaped. He tried to get away. He didn’t want any of the credit or anything like that. That’s something that hit me hard trying to emulate that – just trying to stay humble in all circumstances.”

Like his own parents, Brett strives above all else to have a strong godly marriage and to lead his children into their own relationship with Christ.

His leadership role extends beyond his home and like his infectious personality, spills over onto the field. Join us next week to hear more about Brett’s spiritual role and the impact he has on his on-the-field family, the Tennessee Titans.

To Empower and Encourage

The Eagles Are Flying High, Due To The Ties That Bind.

You too can lead O-H-I-O

September 27, 2017
You are going to send email to
Move Comment