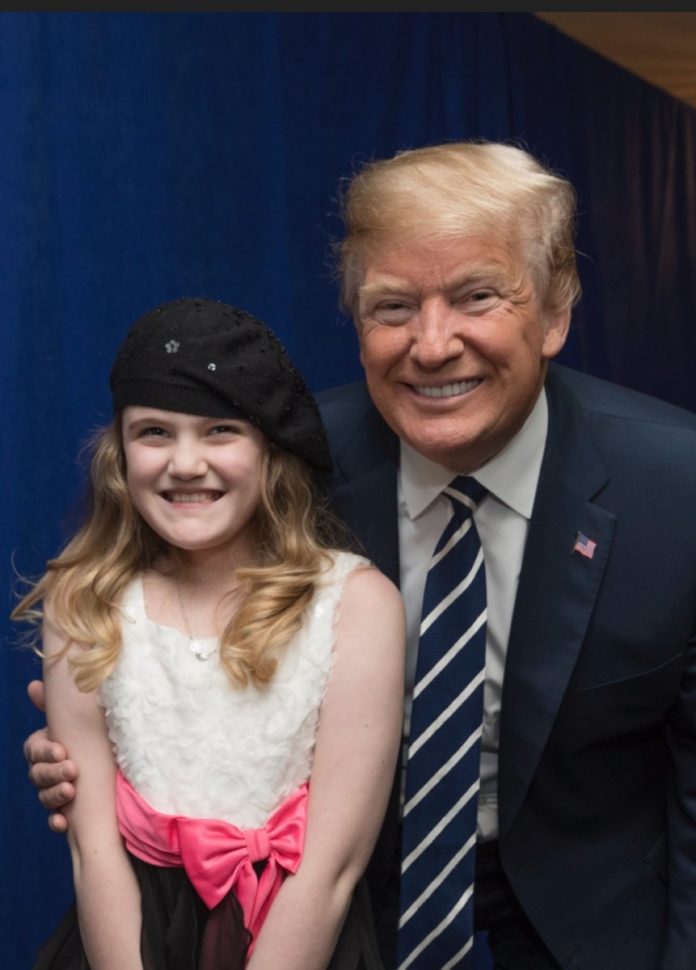 A little girl originally from Apple Valley, CA, Sophia Campa Peters made a big request back in January 2018: Get the whole world to pray for her brain surgery.

Sophia, whose family lived in the High Desert for more than 20 years, now lives in Brownfield, Texas.

With encouragement from her twelve-year-old brother, Jonah, the Peters family started a prayer chain on social media using #10,000people which instantly went viral.

“I’m not asking people to just pray for me. I want people to talk to God,” Sophia said.

Sophia received prayers from thousands around the world including celebrities, a priest from Rome, and even a prayer from the Oval Office. White House Press Secretary Sarah Sanders, said President Trump encouraged Sophia to “keep fighting, to never give up, keep inspiring us all, and never ever lose faith in God, with him all things are possible.”

After a successful surgery, Sophia was invited to attend the National Prayer Breakfast in Washington D.C. in February 2018 where she met President Trump in person. 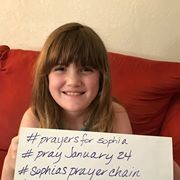 “It was so cool to meet him (President Trump). He was friendly and really nice to me.” Sophia said. “It was special to be with so many people who love God and to eat breakfast. But there was no bacon!”

Sophia began having medical problems at the age of six months.

“Her entire life has been spent in and out of emergency rooms with endless hospitalizations, tests, procedures, and terrifying misdiagnoses. We were told she would not live past one year and were given endless doom scenarios,” Sophia’s mother, Karyn said.

However, Sophia’s condition has consistently defied medical science. In fact, there is no one else in the world with symptoms like hers. Doctors say Sophia suffers from an “unknown genetic vasculopathy.” Her symptoms fall under the umbrella of a disease called MoyaMoya. The disease is characterized as the narrowing of blood vessels in the brain resulting in limited blood flow and eventual brain damage from the lack of oxygen to those areas of tissue. Basically, Sophia’s brain is not getting enough blood. There is no cure.

At the age of six, she suffered a severe stroke. “I remember hearing this noise, it sounded like the ocean, like ocean waves were crashing over my brain. Swoosh. Swoosh. Then it was black,” Sophia said. “And then I heard God say, ‘Sophia, you need to wake up.’ I told God, I don’t want to get up, I’m so tired. I just want to sleep. Then He wouldn’t shut up. I finally said, ‘OK!’”

The stroke left Sophia paralyzed on the left side of her body. Doctors said the damage was irreversible. But the little girl with giant faith, surprised everyone and taught herself to walk again.

One of the neurosurgeons said, “This little girl has God on her side.”

Sophia herself will tell you that indeed, God is on her side. She repeatedly tells her parents, “It’s not about me. It’s about God.”

“She will say profound things like, ‘You only have one life, so you have to make it matter. So, make good choices,’” Karyn said.

Sophia also loves to help and encourage others. Her mother said she can often be found speaking with other young patients in the hospital. Sophia’s ideas for what she calls a “Power Set” that will make more comfortable, fun, and inspiring hospital gowns for kids.

“We are currently obtaining copyrights to her ideas for helping other children,” Karyn said 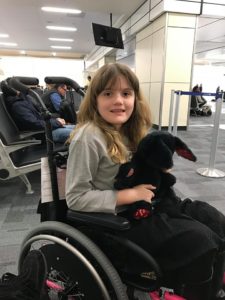 Since her surgery last January, Sophia has once again surprised the medical field. “She has been improving by leaps and bounds in her abilities since her brain surgery.  She has moments of difficulty with her legs and sometimes with her left arm and hand, but these episodes have drastically declined,” Karyn said.

Sophia’s courage and faith continues to inspire thousands worldwide. She receives regular letters, prayers, and comments to her website and on social media. This makes Sophia happy because it gets people talking about God. Recently, with the inspiration of one of her favorite songs “Testify” by the band “Needtobreathe,” she came up with an idea to further her mission by starting her own YouTube channel called Ninja Kitten Sophia. “Because I’m fierce like a ninja but cute like a kitten!” she said.

“God wants to hear from his children. He wants us to pray and I think he wants people to testify about him. So, I’m asking people just two questions to get them talking about God,” Sophia said.

Sophia’s YouTube channel will feature “Just Two Questions with Sophia” where she will be interviewing people from all walks of life asking them impromptu questions about God. The guest line-up will also include some surprise high-profile guests you won’t want to miss. Once again, little Ninja Kitten, Sophia is making a big request: Get 10,000 followers on her new YouTube channel. 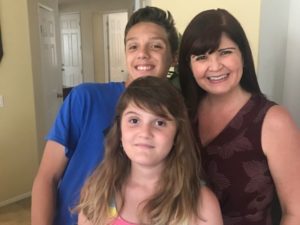 “Now more than ever our world needs renewed hope and faith like that of a child,” Karyn said. “Sophia’s life is a testimony of faith that we all need to hear.”

Honoring Our Vets: American Legion Gears Up for 100 Years of...