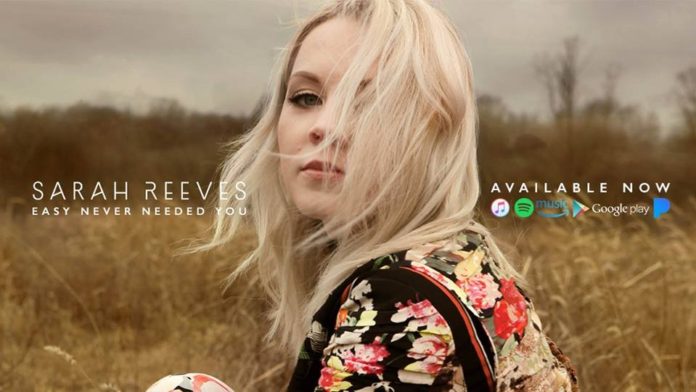 Sarah Reeves is no stranger to the Christian music industry. Her latest album “Easy Never Needed You” gives listeners just the right amount of soft pop, electronic dance, and emotional encouragement that will be sure to touch your heart.

Reeves’s music is known to reflect a rainbow of sound and color with her simple, yet powerful songwriting. She signed her first record deal at the age of 18, has gained a devoted following of than 100,00 fans on YouTube and has written songs for other well-known artists, including Jesus Culture, Kari Jobe, and Natalie Grant.

While the album only consists of seven tracks, its mix of upbeat and soft songs offers a creative and modern spin toward Christian music with relatable and inspirational lyrics about the joy and unconditional love of Christ.

The first track on the album titled “Right Where You Want Me” is an upbeat tune with a message of encouragement and a reminder that Christ’s ways are perfect and our trust forever remains in the path He continues to put forth in our lives.

“This is our story of forgiveness, enduring hardships and fighting for the greater love.”

Her hit song “Details” is consistently playing over the radio the last several months. The song offers a creative take on God’s perspective regarding who we are and how everyone is fearfully and wonderfully made in His image, despite our flaws, as stated in Psalms 139:14. “Details” also captures the simplicity and wholesomeness of knowing the Lord’s plans far exceed those of our own and resting in the assurance of His will.

“Faithful” is the third track on the album that provides a melodious and soothing tone with a powerful message about God’s faithfulness even through the darkest moments of our lives, with the chorus crying out and declaring “Hallelujah.”

One song in particular that hits on a more intimate level for Reeves is the track titled “Feel The Waters,” which is a love song to her husband. Reeves describes this song as “vulnerable and personal” as it tells the redemption story of their once broken marriage as she states:

“There’s too many songs out there about breakups and giving up. This is our story of forgiveness, enduring hardships and fighting for the greater love. It’s romantic and I actually got the first line of the chorus straight from scripture – Song of Solomon 4:11 – “The kisses of your lips drip honey.” God created romance and I’m not afraid to sing about it! I pray that this inspires you whether you’re married, single or dating. Love is worth fighting for.”

Each album on the track offers something different. Whether the beat is poppy or mellow and calm, Reeves knows how to capture her listener’s attention with lyrics based on scripture and hope.