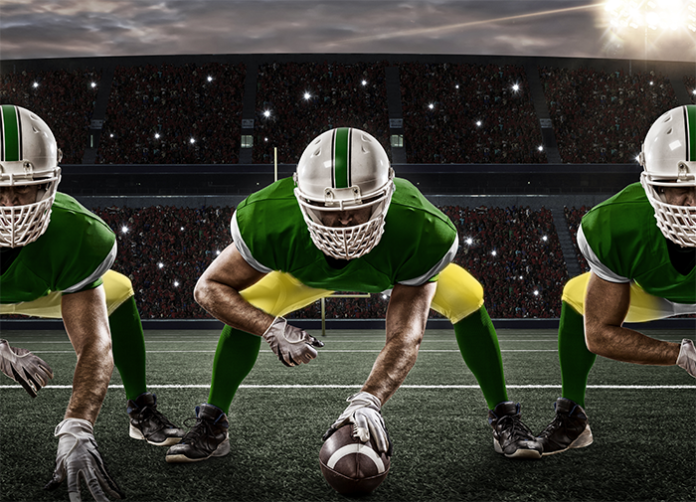 Only one Green Bay Packer crossed the goal line against the Atlanta Falcons on November 13, 2005, but he crossed it three times.

In only his third NFL game, Samkon Gado rushed for 103 yards and two touchdowns, and was perfect in receptions, one for another touchdown. While his family cheered in the stands, the NFL awarded him Rookie of the Week. It was his 23rd birthday.

…I knew it in my head before, but now I know it in my heart that God is not limited by anything.”  Dr. Samkon Gado

That sort of thing doesn’t happen.

It definitely doesn’t happen to a boy growing up in a small village in Nigeria who’d never heard of the NFL. Nor does it happen to a boy with his sights set on becoming a surgeon. Yet, Dr. Samkon Gado of Kufai, Nigeria, holds NFL records, even as he finishes his second year as an otolaryngology resident at Saint Louis University.

For all his accomplishments, Samkon remains humbled. “I’ve heard that God uses the foolish things, the small things, to do big purposes. Now I know. I knew it in my head before, but now I know it in my heart that God is not limited by anything.”

As a boy, Samkon knew about planting corn and peanuts, but not about touchdowns and MCATs. He wasn’t dreaming of NFL greatness or operating room procedures when, as a six-year-old, he challenged a 13-year-old to a race. After sprinting off, another boy tripped him, and he broke his arm. He later demanded a rematch. Tripped again, he broken his arm once more. The odds for greatness didn’t favor Samkon, whose love for adventure often overrode his responsibility and common sense.

“God is not limited by statistics or odds,” Samkon says. “He’ll do what he chooses to do irrespective of the circumstances.” Or the person, as Samkon would begin to understand when his father, Jeremiah, moved to South Carolina to study at Columbia International University. His family faced insurmountable challenges to join him, but against all odds, they received five visas and unexpected donations that enable them to move.

In America, Samkon struggled to fit in. Running with school bullies led his parents to apply for and receive scholarships for Samkon and his sister Ruth to attend Ben Lippen, a Christian school. There he discovered biology and football—and his future.

The gun intended to kill him, however, jammed three times.

About this time, his father traveled to Nigeria but couldn’t get a visa to return to the US. While there, thieves ambushed him and left him to die. The governor came upon Jeremiah, assumed he was a criminal, and ordered his execution on the spot. The gun intended to kill him, however, jammed three times. Before the gunman could try again, the governor realized he was a victim, not a criminal, and spared his life. Shortly after, he received his visa and returned to the states.

The incident changed Samkon. He came to believe that if God would do the impossible for his parents, he would do the same for him if he would trust in and follow God. This belief was soon tested.

Samkon was stuck on third string during his freshman year. When two players above him switched schools, he entered his sophomore year with the hope of more playing time. The hope died when, during the second game of the season, he broke his leg.

He looked forward to his junior season, but his family didn’t have tution money. He prayed for the impossible and got it—Ben Lippen awarded Samkon a scholarship. Because his sister Ruth, a rising senior, also needed tuition money, he and his parents decided to give her the scholarship. Through God’s miraculous providence, however, an unexpected donation arrived, enabling Samkon to return to Ben Lippen with Ruth.

By the end of the season, he was the #2 runing back in the state, racking up to four touchdowns and 300 yards in a single game. “Everyone was wondering where this kid came from,” Ruth says.

Samkon was unstoppable his junior year. By the end of the season, he was the #2 runing back in the state, racking up to four touchdowns and 300 yards in a single game. “Everyone was wondering where this kid came from,” Ruth says.

Samkon’s father wanted him to play soccer until he saw that God was blessing him. “They (his parents) came to the games,” Ruth remembers with a smile, “and every time Sam ran for a touchdown, my mom was running down with him.” By graduation, Samkon had run for 2,100 yards, scored 31 touchdowns, and was named Athlete of the Year. He received a full scholarship to Liberty University and began dreaming of the NFL and medical school.

His dream stalled, however, as he sat on third string for three years. He worked faithfully and prayed for God to make a way. His break came in his senior year when he exploded onto the field, rushing for almost 1,000 yards. It wasn’t enough, however, to entice an NFL team to draft him.

“…Sam always kept his eyes focused on what mattered — his relationship with the Lord…” Mother, Ruth Gado

Ruth remembers that time. “Sam always kept his eyes focused on what mattered — his relationship with the Lord and whatever it was that God had called him to do, no matter what the cost, and no matter how many times the doors were shut in his face.” Unexpectedly, the Kansas City Chiefs opened a door for Samkon, signing him as a free agent. The Green Bay Packers swung the door wider when they picked him up after the Chiefs released him.

On October 30, 2005, Samkon played in his first NFL game against the Cincinnati Bengals. On November 6, against the Pittsburg Steelers team, who went on to win the Super Bowl, Samkon scored his first NFL touchdown. He kept that football. It was the first football he’d ever owned. Instead of the traditional Lambeau Leap onto the wall to celebrate with fans, Samkon dropped to his knees and thanked God for bringing him to this impossible moment.

“I’m really not anything special. I don’t think I had anything that was given to me from birth that can explain all of the things that God’s allowed me to do…” Dr. Samkon Gado

Next up, Green Bay played the Baltimore Ravens. During the game, his season ground to a halt when he sprained his knee. Green Bay released him the following season. He bounced between four teams over the next four years. “When I look at my career,” Samkon says, “it started out fast and ended quickly. It was God saying, ‘I choose not to use you anymore in this capacity.’ He turned off the switch.”

When the Tennessee Titans released him in 2010, he trusted God for his next impossible dream—medical school. Newly married to Rachel Mowrey, who he’d met while playing for St. Louis, Samkon began living the dream when he entered the Medical University of South Carolina (MUSC) with the help of his NFL pension.

Reflecting on his life, Samkon says, “I’m really not anything special. I don’t think I had anything that was given to me from birth that can explain all of the things that God’s allowed me to do. I’m well aware of my shortcomings and how woefully inadequate I am in many respects. If there’s anything people see in me that’s attractive, I believe it’s only the whispers of God’s work in my life.”

Samkon’s next impossible dream includes returning to Nigeria with his family and the Cultural and Evangelistic Ministries for Africa (CEMA) to offer healing and hope to others. “Because God has done the impossible for me,” Samkon says, “I know he’ll do it for others.”

Article used with permission and first appeared in Reach Out, Columbia magazine in October 2014.