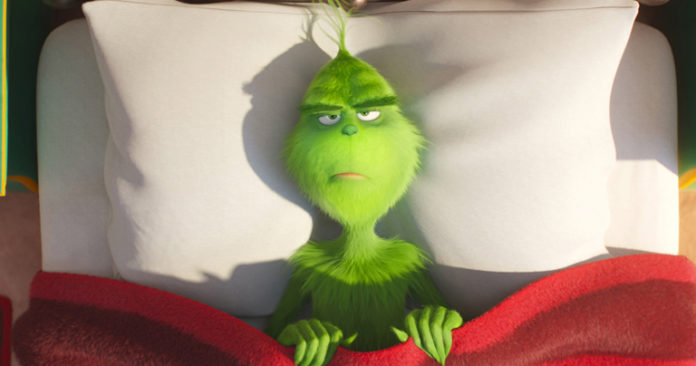 As a father of four small children, I’m always on the lookout for kids movies that remain — you know — kid-friendly. And it’s even better if the film includes a few lessons for a post-movie discussion about life.

I’ve lost count at the number of “children’s films” that contained questionable adult content. But there are exceptions, and a new movie in theaters this weekend — The Grinch (PG) — stays firmly in family-friendly territory while giving us a few positive messages, too.

The film remains true to the book and even adds a few welcome twists. We learn why Mr. Grinch’s heart was two sizes too small. We get to know Cindy-Lou Who’s family. And we hear two Christ-centric Christmas songs.

Mr. Grinch, though, isn’t happy, and he subsequently hatches a plan to dress like Santa, sneak into the town, and steal everything on Christmas Eve. Surely this will steal the Whos’ joy and cause them to cancel Christmas … right? Yet it has the opposite effect, and Mr. Grinch’s heart is transformed by seeing the Whos forgive and reach out to him.

I grew up reading How the Grinch Stole Christmas. The film remains true to the book and even adds a few welcome twists. We learn why Mr. Grinch’s heart was two sizes too small. (He was orphaned as a child.) We get to know Cindy-Lou Who’s family. (She’s the little girl who convicts him of his bad deeds.) And we hear two Christ-centric Christmas songs: God Rest Ye Merry Gentlemen and Silent Night. (Both are sung loudly by townspeople, helping moviegoers remember the reason for the season.)

The Grinch is filled with great messages for children, too. Among them: Christmas isn’t about “struff.” Gifts don’t bring joy. People around us need love.

The colorful animation is splendid, the soundtrack wonderful, and the story full of laughs. (My favorite: Mr. Grinch’s “Mold Spice” body spray.) Even better: It’s family-friendly. The film gets its PG rating from “brief rude rumor,” which is mild compared to other films and includes a boy accidentally getting his clothes ripped off and covering himself with a cookie. It contains no coarse language.

The Grinch is filled with great messages for children, too. Among them: Christmas isn’t about “struff.” Gifts don’t bring joy. People around us need love. (The latter point is made loudly by Mr. Grinch during a flashback scene.) Christian parents can add another message: People need Jesus.

It stars Benedict Cumberbatch (Doctor Strange) as Mr. Grinch, composer Pharrell Williams as the narrator, and Cameron Seely (The Greatest Showman) as Cindy-Lou Who.

It’s one you can watch again … and again. It’s an instant Christmas classic.

Once Upon A Prince: a Romance Story on the Hallmark channel