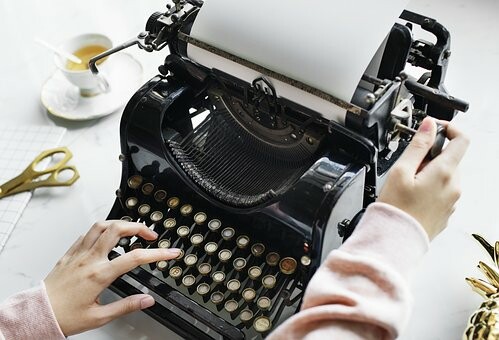 Eleven years old and a writer of nine published books out of a twelve-book series?

Amelia Hansen’s Catrina Series centers around a cat named Catrina who has various adventures. How does Amelia decide where to send Catrina? She spins the globe, and wherever her finger lands, that’s where Catrina will go. Amelia’s already decided that for her tenth book, her cat will be off to Japan.

The age span of our writers in the High Desert Branch of the California Writers Club is broad and, members believe, unique. A recent panel moderated by Dwight Norris, President, presented members Amelia Hansen, Rebekah Koontz, in her early twenties, Amy Burnett and June Langer, four months apart in age, but both ninety-six. These writers have several characteristics in common:  All live in the high desert of California, all are published and/or award-winning writers, and all are Christians.

June Langer had been attending CWC member Janis Bram’s Sun City writing critique group for a number of years. Janis is a retired secondary English teacher and published writer with a Master’s Degree in Writing Composition. Because her group was dwindling, June suggested Janis lead a new group. Janis happily agreed, and the women named themselves “Wise Women Writers” at their first meeting and set up a schedule. June has been published in High Desert Writers Club anthologies and in The View, the Sun City monthly magazine. She calls herself a “late bloomer,” because she didn’t start to write for publication until her eighties. June is working on her memoir, “Bits and Pieces,” which contains stories of The Chicago World’s Fair and her family’s first refrigerator,

Wise Woman Writer Amy Burnett, whose short story, “Trains and Dresses on a Summer Day,” won first place in the Prose category in our branch’s latest anthology, Tales Between Sand and Stars recently moved into Sun City. She’s been writing all her life, and her short story, “My Stolen Ancestor” was included in Saturday Evening Post Best Short Stories of 2015. Amy fictionalizes some of the stories from her own life, but some “are completely new as they arrive in my head.”

Nothing keeps these writers who consider themselves life-long learners from writing and learning more about their craft. All are proficient on the computer for both writing and research and love the convenience. Rebekah jokingly asked, “What is newsprint?” and loves how her IPAD and phone give her access from anywhere. Amy cuts and pastes and appreciates how she can make corrections easier, read back and delete mistakes.

Amelia found the writers club through a brochure at the Hesperia Library and Amy saw an ad in the paper. Rebekah and June were brought by friends.

When asked how each handled writer’s block, June said she did something else besides write. Rebekah talks to someone else, and Amelia heads for her globe to find a new place and think about what her main character can do there.

These writers have several characteristics in common:  All live in the high desert of California, all are published and/or award-winning writers, and all are Christians.

All find the writer’s club “inspirational,” “fun,” and a “good outlet.” To acquire more young members all had suggestions. Rebekah recommended posters in schools and using social media. We need to “go where kids go.” Amy agreed, but added we should have a sign saying, “Food Available!” June said to “tell your friends who have children.”

When asked to tell the weirdest or most uncommon place they get their ideas, Amelia said usually from the globe, but “sometimes outer space movies.” Rebekah admitted to getting some of her ideas in the shower. June says ideas sometimes “seem to come from the clear blue sky” when, for example, she remembers something from childhood. Amy said once, at 2:00 a.m. close to Christmas, she thought of a six-year-old boy who knows Santa doesn’t exist but thinks his parents still believe. She took an idea and “turned it around.”

Each writer entertained and enthralled the audience by reading a passage from their writing. Amelia read from her book, “Catrina and the Long Lost Legend.” Rebekah read her humorous short story, “My Phone Was Stolen, and You’ll Never Guess Who Did It.” Amy read from her short story, “Snowfall,” a romance in which “characters keep their clothes on,” and June read “Musing,” a history of  Fig Newtons and the town of Zion, Illinois where many live who believe the world is flat.

Our club has every reason to be proud of these women who believe getting down stories, fiction, and nonfiction, matters. Fellow writers were encouraged to “Sail On,” our club motto or to keep moving forward no matter what our age.

Amelia Hansen’s books are available on Amazon.com, and the High Desert California Writer’s Club meets the second Saturday of every month throughout the year at Jess Ranch Community Church in Apple Valley.

How Far Would You Carry The Cross?

December 16, 2017
You are going to send email to
Move Comment