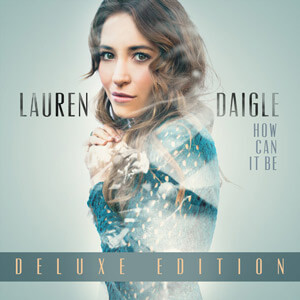 Lauren Daigle has certainly made a name for herself in the music industry.

A native to Louisiana, Daigle has experienced pain and hardships first hand at a young age after falling ill to an immune deficiency that kept her away from school for two years. However, that did not stop Daigle from pursuing her dreams.

Using her personal experience, she has created a unique sound that combines heart and soul with her raspy and sultry style of singing to offer an album which ultimately depicts humbling one’s self and becoming fully vulnerable in the presence of the Father.

Her album “How Can It Be” has become a Billboard Top 20 Christian Album champion, and has also continued to dominate the charts for 126 consecutive weeks—still remaining at No.1 along with many of her songs becoming single hits.

The young Christian artist has since gone on to win a handful of awards for her music, including being named one of Christian music’s break-out artist and numerous K-Love Fan Awards.

The title song itself “How Can It Be” no doubt stands-out as it is reminding listeners about the grateful heart inside every believer, although at times we may not show it, as she sings:

“You plead my cause. You right my wrongs.

You break my chains.

You gave Your life to give me mine.

You say that I am free.

“I Am Yours” is another great song which engages the listener into the imagery of someone who in the midst of uncertainty but is reminded God can overcome the storms, no matter how deep or how high the water may be rising while resting in His promise.

Two songs on the album thoroughly engage some of the Scripture’s most powerful and inspirational passages.

One of those songs would be “Come Alive (Dry Bones)” as it brings to life Ezekiel’s prophecy of the dry bones coming alive with such vivid creativity and imagination. The lyrics of this song immerses listeners to a very peaceful and quiet place as they are reminded how the Lord has the power to breathe life into the dry places of one’s life and heart.

Without the breath of God breathing into our souls, we are nothing but dry bones as Ezekiel had stated.

“Salt & Light” is the second song on the album which focuses heavily on its biblical meaning directly from the words of Jesus taken from the New Testament during his Sermon on the Mount.

During his Sermon on the Mount, Christ encouraged his followers to be the “Salt and light” of the earth in Matthew Chapter 5. The song is a great encouragement, lesson, and reminder how Jesus desires His people to affect others in positivity and to let their light shine and become a beacon of truth, just as salt seasoning brings out the best flavor in meals.

There are so many great songs on this album that should get recognition.

Ultimately, Daigle’s album is a beautiful reminder of God’s bountiful love for his people and showing how to come to the feet of Jesus in full abandonment.

In the Wake of the Florida School Shooting: What the Church...

The Key to a Great Summer