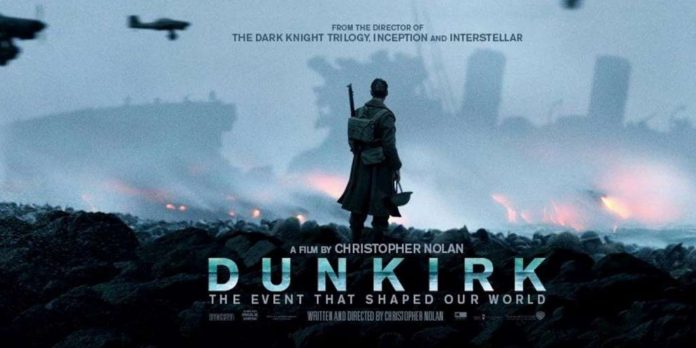 From The Dark Knight Trilogy to Interstellar comes Christopher Nolan’s latest film, Dunkirk based on the heroic true story of 330,000 French, British, Belgian and Dutch soldiers rescued from Dunkirk.

Set in May 1940 during World War II after the invasion of France by Nazi Germany, thousands of Allied soldiers are found trapped on the beaches of Dunkirk as they await evacuation, though all seems hopeless.

Throughout the film, the narrative follows three major plot points which are interwoven in a nonlinear narrative: “The Mole,” which covers one week on Dunkirk, “The Sea” covering one day, and “The Air” covering one hour.

It’s survival of the fittest for the soldiers while also maintaining their sanity as they are slowly evacuated from the beach using every serviceable naval and civilian vessel that could be found.

The best way to describe Dunkirk is simplistic but highly realistic.

The movie does not shy away from depicting the horrors of war as well as the psychological impact the soldiers face, which makes it all the more realistic and frightening.

Just about any narrative revolving around war is horrific and terrifying. Dunkirk, however, does it in a way that makes the audience feel they have been dropped in the middle of the action, facing doom and gloom everywhere one looks.

The film opens with despair in an abandoned town in France as Allied troops are attempting to get safely to the beach. From there, it is non-stop nail-biting suspense and action not knowing if these men will survive.

What is also interesting about Dunkirk is the lack of dialogue spoken throughout the entire film.The score and visuals are what is telling the story and helping move the three plot points along.

Hans Zimmer, of course, once again composed the music for Nolan’s new film and he does a great job taking full advantage of giving the score an eerie and intense sound that perfectly captures the struggles each character is facing.

The best part about the film has to be the dog fights in the air as Tom Hardy’s character Farrier, a Royal Air Force pilot, provides air support to the troops waiting in Dunkirk. Anytime Hardy is on the screen taking down a German plane, the suspense, top-notch and authentic visuals keep the viewer sitting on the edge of their seat.

One complaint about the film would be due to the fact there is little to no dialogue, the audience may not get emotionally invested in the characters as the plot is constantly shifting from one moment to the next.

Nevertheless, Dunkirk is not about solely focusing on one group of particular characters or getting from point A to point B.

It is a film that is 100 percent about being in the moment of war from beginning to end.

REVIEW: ‘Stan and Ollie’ is a marvelous tale about friendship