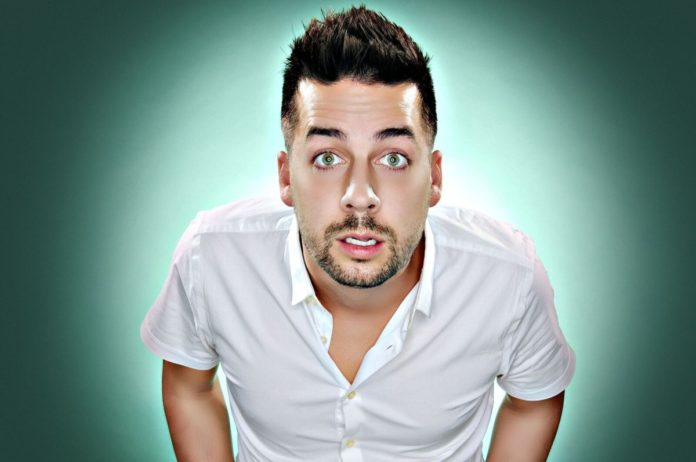 Comedian and viral video sensation, John Crist drew a crowd from across the High Desert community, packing the Powell Auditorium of High Desert Church in Victorville with more than 1,650 in attendance.

Fans like Deborah Caren from Wrightwood didn’t mind driving a distance to see the show.

“My kids are Millennials. So, I love his YouTube video “The Millennial Missionaries.” It’s so Hilarious!” said Caren.

Those who arrived early to save their seats, laughed together, discussing other of Crist’s YouTube videos like “Road Rage in the Church Parking Lot,” “The Official Rules to Pre-Meal Prayer,” and “Lady who has a Bible Verse for Every Situation.”

When the lights began to dim, the audience turned their attention to the screen which played a video recorded in the car just before the show. Crist along with Dustin Nickerson, rising comedian from San Diego, bantered back and forth on their ride through the High Desert on their way to the performance.

Nickerson, an equally talented comedian, opened the show describing himself as “the world’s most average person.” His jokes about the struggles of parenting, marriage, and being generally annoyed by most people primed the crowd for Crist’s act that followed.

Crist’s high-energy, audience interaction and jokes about the Christian subculture had the room roaring for the duration of the evening.

“Life has been hard the last few weeks. I needed a good laugh. It’s great to hear a clean comedian,” said Marie Martinat of Victorville. 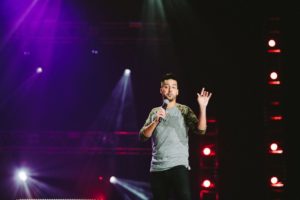 With over 200 shows a year, Crist has shared the stage with some of the best in the business including Seth Meyers, Jeff Foxworthy, and  Michael Jr. to name a few.

Crist joined the comedy circuit nine years ago, rooting himself in the world of Christian comedy where his niche-specific jokes earned him the title “Top Five Comics to Watch” by Churchleaders.com, also making him a household name among Christian families.

Although currently living in Tennessee, Crist grew up in Georgia. He is the son of a pastor, one of eight children and was homeschooled, providing him with plenty of fodder for jokes on the Christian subculture. His experiences even include a stint working in a Chick-fil-A as a high school kid when his parents insisted he work there.

Being raised in a Christian home, does your family support your comedic career choice?

Yeah, they 100% support me. They’re the best. They come out to tons of shows. My mom is hilarious. She always stands at the merch table after the show trying to tell everybody that the stories didn’t happen like that.

What inspires your material?

I always say on stage, “The only reason why anything I’ve said tonight is funny is because you have already thought it yourself.” I think it’s cool that I’m able to put words to things that other people–Christians especially– resonate with. A lot of my jokes are on the topic of Christian subculture. It’s just what I know the best (I grew up as one of eight homeschooled kids and our dad was a preacher–how much more stereotypical can you get?), but I know I’m calling out some sort of truth about the church, our culture, etc. that historically we as Christians have been too afraid to say or to acknowledge. That’s why it strikes such a cord. 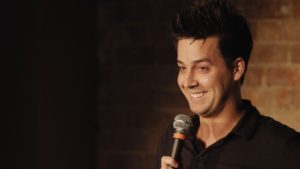 When did you begin doing comedy?

I started in 2008. I had moved out to Colorado Springs and started making videos and doing the announcements for my church. People started saying I was hilarious in front of the camera and asked me if I had ever considered standup. That’s what really first put the idea in my head.

What do you love about your job?

My favorite part of touring is meeting people from different areas of the country and hearing how my comedy has impacted them or their favorite part of my act. This lady came up to me after a show the other day holding a stack of my DVD’s she had just purchased. She was crying and when I asked her what was up, she said, “I have stage 4 cancer, and I spend every waking minute thinking about this disease that’s taking over my body. But for the hour that you were up on that stage, I felt free.” She said she was buying DVD’s to take back to her friends in the hospital. That kind of stuff, it’s too much for me.

“A joyful heart is good medicine, but a crushed spirit dries up the bones.” Proverbs 17:22 ESV

More about John Crist at http://www.johncristcomedy.com/

REVIEW: ‘Alita: Battle Angel’ is a fun ride with a good...