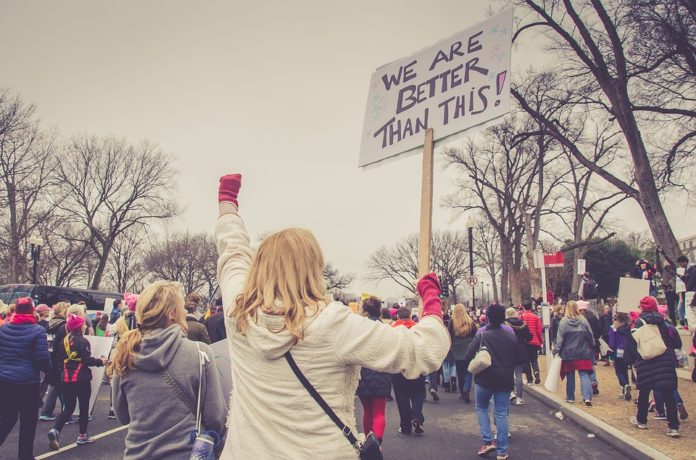 A white nationalist rally on August 12, 2017 turned into a free-for-all hate fest as rally supporters clashed against counter-protesters in Charlottesville, Virginia.

The rally was in protest of the ruling to remove the statue of Gen. Robert E. Lee, commander of the pro-slavery Confederate army in the U.S. Civil War, from a downtown park. Counter-protesters denounced the other group’s racism and white supremacy.

In the midst of the melee, a car plowed right into the marchers and killed a 32-year-old female pedestrian. The driver of the car has been arrested. Later, a police helicopter monitoring the rally crashed, killing two troopers. Thirty-five others were injured in the chaos-filled weekend, NPR reports.

People were shocked at the level of violence in Charlottesville. Churches across America rose to the occasion to denounce any form of racism, calling it out as “sin”.

Jon Quesenberry, the Director of the Charlottesville House of Prayer stood with twelve intercessors between the opposing sides to pray and sing worship songs.

“We stand with our sisters and brothers united in the sacrifice of Jesus, by which love’s victory over every form of evil is assured.” U.S. Conference of Catholic Bishops

According to Wanda Alger, IFA Field Correspondent, Jon Quesenberry said, “Worship silenced both groups for about an hour! We saw what public worship and prayer (declarations in partnership with heaven) can do. The most amazing thing is that we had an assignment from the Lord that was ‘counter protest.’ We brought a different atmosphere. Both groups backed away from us and neither group knew what to do with us. It really did stop the momentum of the hate (shouting) for almost an hour.”

Catholic church leaders also called for peace following the attack in Charlottesville. In a statement, the U.S. Conference of Catholic Bishops said, “As we learn more about the horrible events of yesterday, our prayer turns today, on the Lord’s Day, to the people of Charlottesville who offered a counter example to the hate marching in the streets. Let us unite ourselves in the spirit of hope offered by the clergy, people of faith, and all people of good will who peacefully defended their city and country.

“We stand against the evil of racism, white supremacy and neo-nazism. We stand with our sisters and brothers united in the sacrifice of Jesus, by which love’s victory over every form of evil is assured. At Mass, let us offer a special prayer of gratitude for the brave souls who sought to protect us from the violent ideology displayed yesterday. Let us especially remember those who lost their lives. Let us join their witness and stand against every form of oppression.”

To Be Fruitful and Multiply, in the Name of Jesus Christ