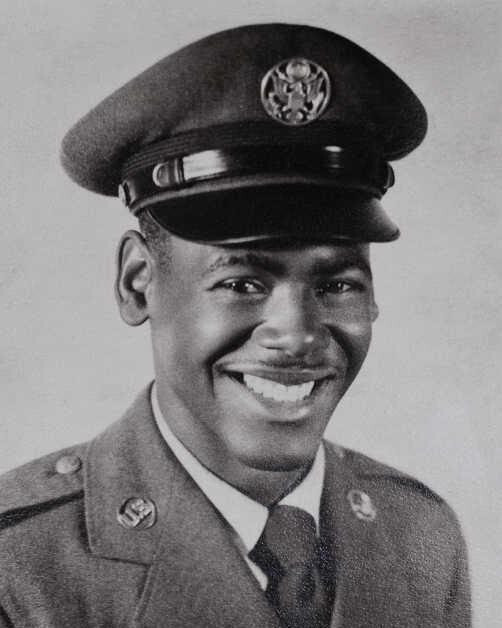 November 9 was a night to celebrate the lives of Mr. and Mrs. Isiah and Gloria Roberts.

Many of those in attendance were retired or active military and teachers, in addition to the three tables of family members. A color guard presented flags of the five branches and a missing man table tribute ceremony. 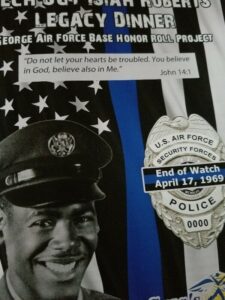 Gloria Roberts is a woman full of surprises. For one, she doesn’t look her eighty-two years. She sings and plays the piano beautifully, and bowls once a week. She is active in several community and educational service groups, and in her church, Abundant Living Family Church. She has also been a widow for fifty years.

Gloria and Isiah’s love story began in Florida. Isiah was stationed at Parick AFB near Satellite Beach, and they met at a party in 1953. They went to Gloria’s senior prom together and dated until Isiah received orders to Japan. They married before he left, a military wedding on October 16, 1955.

After a year apart, Gloria joined her husband in Japan where their first-born, Gary, was born. After an assignment in Florida where two daughters (Terri and Wendi) were born, and then Alaska, Isiah came to George Air Force Base in Victorville in 1965. While stationed at George, Isiah served non-combat tours in Vietnam.

After graduating from the San Bernardino County Sheriff’s Academy as one of three top graduates, Tech. Sgt. Isiah Roberts, now a military police officer, answered a domestic disturbance call on April 17, 1969. At precisely 1:30 a.m., Isiah heard a scream before the phone went dead. Although the call was supposed to be assigned to a junior airman, Tech. Sgt. Roberts offered to take the call instead. That was like him. He cared for his men. Roberts and Patrol Sergeant Joel Reynolds went to the site on George Air Force Base in Victorville, California. Roberts and Reynolds knew the Sergeant who lived in the on-base home.

Roberts sent Reynolds to the patrol vehicle to monitor the individual, while he went to talk to the man. But the resident told Roberts to go away, then closed the door. But the man’s wife approached Roberts from the side of the house and said she wanted to make a formal complaint about her husband beating her. Her husband opened the door and confronted Roberts while the couple’s twelve-year-old daughter ran to her mother’s side. Roberts agreed to escort the wife and daughter to his patrol vehicle when, without warning, the sergeant drew a gun and fired multiple shots at Roberts, Reynolds, and the victim. Roberts was struck five times and fell. Reynolds was struck in his left hand. The woman and her daughter were not harmed.

An ambulance came, security police took the suspect into custody, and both Roberts and Reynolds were rushed to the Base hospital.

Roberts died of his wounds. He was one year away from retiring from the Air Force. Gloria says, “I was at home with my kids when the doorbell rang. It was the First Sergeant who came to deliver the news. I remember it was past midnight when he came and told me that Isiah had been shot. He was at the hospital and that it was not good.”

Gloria relied on her faith, particularly Romans 12:10, church. family, especially her sisters, Ann and Gartha, many friends and community to help her grieve, deal with tough times, and to raise her three children.

“Be kindly affectioned one to another with brotherly love; in honor preferring one another.”
Romans 12:10

Gloria adds, “We buried Isiah in his hometown in Georgia and continued living on base for a while. I was working as a teacher’s aid at Sheppard Elementary School and while filling various positions, and with the encouragement of Dave Burnell, the Superintendent, I enrolled at Chapman University and secured my teaching credential. I taught elementary school until 1997.”

Four months following his death, a public ceremony at George Air Force Base was held to rename a theater the “Roberts Memorial Theater.” Sheriff Frank Bland called Roberts “a great man,” who loved his family, his country and the opportunity to serve others,” according to the Daily Press.  In 1997, Security Policeman Michael Kennedy who worked with Roberts began contacting organizations and was able to, in 1999, add Isiah Robert’s name to the National Law Enforcement Officers Memorial in Washington, D.C.

Isiah and Gloria and their beautiful family will continue to have an impact on individuals and on the community of the high desert for many years in the future.

The Gift Of Grace For Christmas