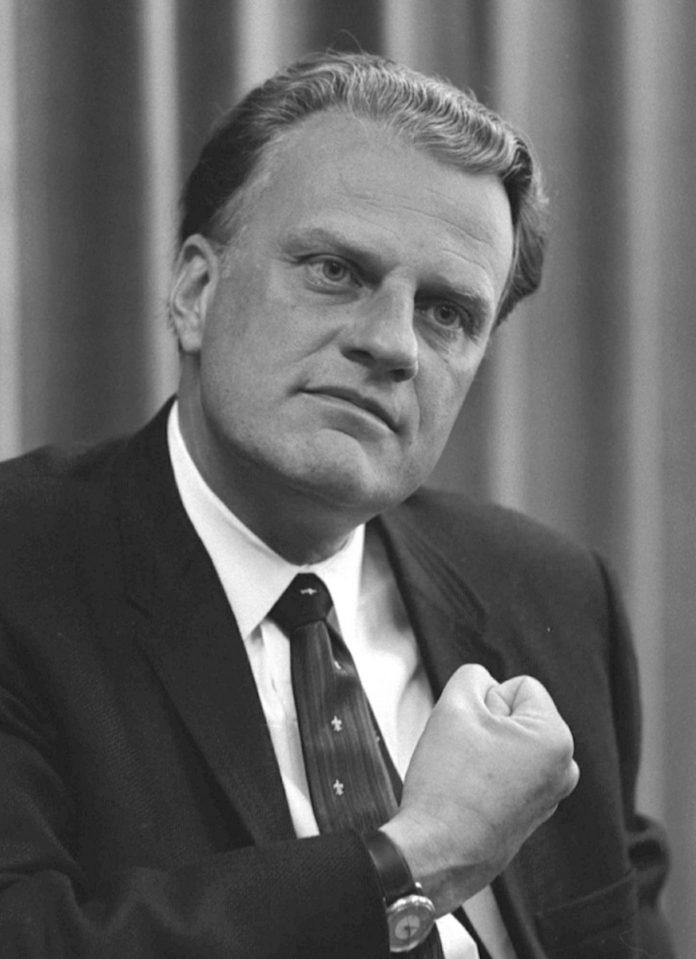 Billy Graham died Wednesday at the age of 99. The world-renowned evangelist born Nov. 7, 1918, in Charlotte, N.C., passed away peacefully at his home in Montreat, North Carolina, after struggling with various health problems attributed to his advanced age.

Countless lives have been dramatically impacted around the world by the Southern Baptist preacher raised on a dairy farm. I am one of them. It was 1983 in Oklahoma City, Oklahoma when I attended one of the Rev. Billy Graham’s crusades. His voice boomed, reverberating in my fifteen-year-old chest. I had never seen so many people gathered in one place.

Countless lives have been dramatically impacted around the world by the Southern Baptist preacher raised on a dairy farm. I am one of them.

But it wasn’t just Graham’s preaching that struck me, it was something more. Although his words seemed to embed deep inside of my heart, I knew they were empowered by God Himself. I watched as hundreds went forward, many with tear-soaked faces, to accept Christ as their Lord and Savior. God used that profound event to catapult my own faith. For I already knew Jesus as my Savior, but that day a new fire was kindled. My faith seemed to come alive and begin to grow from that day forward.

From the average person (like me) to those in powerful positions, Graham has been a friend to celebrities, politicians, athletes, and leaders, such as Martin Luther King, Jr., Bono, Muhammad Ali, Johnny Cash, Larry King, and presidents from Eisenhower to Bush.

Reaching over 200 million people in more than 185 countries, Graham had the privilege of leading hundreds of thousands of people to pray to receive Jesus Christ into their lives as Lord and Savior.

Reaching over 200 million people in more than 185 countries, Graham had the privilege of leading hundreds of thousands of people to pray to receive Jesus Christ into their lives as Lord and Savior.

Billy Graham has been named by Americans as “One of the Ten Most Admired Men in the World,” a record-breaking 59 times with the Gallup poll.

“My grandfather once said, ‘One day you’ll hear that Billy Graham has died. Don’t you believe it. On that day I’ll be more alive than ever before! I’ve just changed addresses.’ My friends, today my grandfather moved from the land of the dead to the land of the living,” Will Graham (whose full name is William Franklin Graham Jr.) said in a statement to the Christian Post.

Indeed, in one of the many quotes Billy Graham is famous for, he states, “My home is in Heaven. I’m just traveling through this world.”

Here are a few more powerful quotes from the beloved man of God admired by so many:

“The will of God will not take us where the grace of God cannot sustain us.”

“I’ve read the last page of the Bible, it’s all going to turn out all right.”

“It is the Holy Spirit’s job to convict, God’s job to judge and my job to love.”

“Suppose you could gain everything in the whole world and lost your soul. Was it worth it?”

“There is nothing wrong with men possessing riches. The wrong comes when riches possess men.”

“Courage is contagious. When a brave man takes a stand, the spines of others are often stiffened.”

“Sin is the second most powerful force in the universe, for it sent Jesus to the cross. Only one force is greater—the love of God.”

“Being a Christian is more than just an instantaneous conversion – it is a daily process whereby you grow to be more and more like Christ.”

“I’ve become an old man now. And I’ve preached all over the world. And the older I get, the more I cling to that hope that I started with many years ago, and proclaimed it in many languages to many parts of the world.”

Things Every Believer Ought to Know