While Christmas shoppers bustled through the Victorville Barnes and Noble on a blustery Sunday afternoon, some were drawn to a table with a mug filled with blue raspberry Tootsie Pops provided by a local award-winning author, Mary Langer Thompson.

The blue-colored candy is in honor of her children’s book, How the Blue-Tongued Skink got his Blue Tongue and will leave a partaker’s tongue blue like “Dinky” the skink. The author was there to promote and sign copies of her book.

Thompson, from Apple Valley, was an English major in college and began writing for educational journals and magazines in 1974. She also taught secondary English because she “liked teaching, but also because she had a house payment.” When she retired as a teacher and elementary school principal, Thompson began writing full-time.

The inspiration for her writing started from her teachers, especially a high school English teacher. Thompson’s family and local Writers Club, High Desert Branch along with other authors in the critique groups she is a member of are an inspiration and encouragement.

“I believe you learn by teaching and so teaching even now informs my writing and vice-versa. My advice for anyone who wants to write is to read, read, read. And to read like a writer,” Thompson said.

In 2012, Thompson was awarded Senior Poet Laureate of California for her poem, Wishbone in Moonglow. She has also been awarded the National Indie Excellence Finalist Book Award for both her poetry book Poems in Water and children’s book, How the Blue-Tongued Skink got his Blue Tongue. 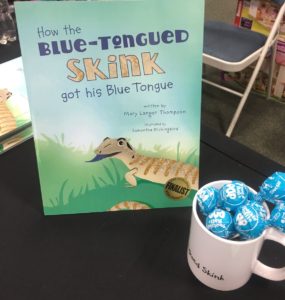 The idea behind writing her children’s book started when a friend, a native of Australia, was in financial trouble and sold his blue-tongued skink. Thompson was instantly intrigued and inspired.

“I couldn’t stop thinking about a story about how a skink might get his blue tongue. You need conflict in stories, so I thought of how the first bully was that snake in The Garden. He became Dinky’s ‘cousin’ in the book since they’re both reptiles. So could Dinky be bullied and somehow in the process of standing up to the snake and woman get a blue tongue?”

Thompson, raised in the church and a Christian since the age of five, says her faith has impacted her writing from a young age and continues in her writing today.

“I remembered how I used to get upset at my high school English students when they didn’t know what John Steinbeck was referring to in The Pearl when he talked about Eden. Kids know all the myths of Wonder Woman and Thor but they don’t know our Bible stories?”

Although her children’s book won its award in Christian Children’s Literature, she says it was most likely because it’s set in The Garden, not because it has an explicitly Christian message.

“However, if my Skink becomes an ambassador somehow for kids finding Christ, that would be icing on the cake.”

How the Blue-tongued Skink got his Blue Tongue is available in English and Spanish on Amazon, Barnes and Noble, and on Fishpond, an Australian bookseller. It is also available in the Redlands County Museum gift shop because they have a popular real-live blue-tongued skink in their museum. Kids can meet and maybe even pet ‘George’ and see his blue tongue in action.

Love is the answer God is the cure by Aimee Cabo...