Southern California Christian Voice
Home Entertainment Movies ‘A Beautiful Day in the Neighborhood’ lands on Hulu at just the... 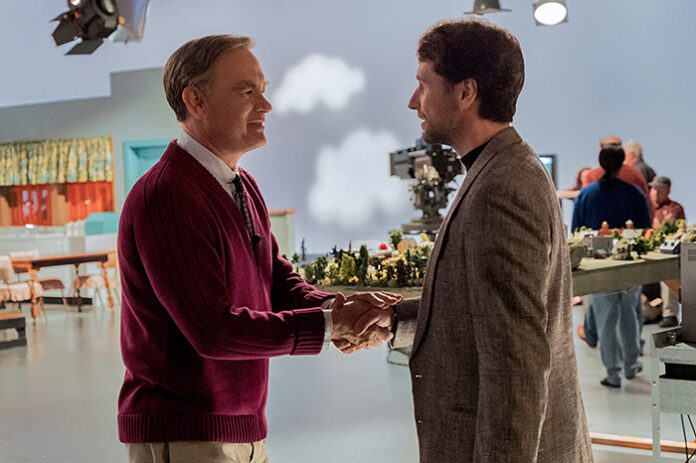 A movie about Fred Rogers began streaming on Hulu in June, and it couldn’t come at a better time in U.S. history.

Rogers, of course, was the soft-spoken, always-kind children’s television host of Mister Rogers Neighborhood, which ran on public television for 31 years and taught kids about life but also about the fruit of the Spirit — even if he never quoted Scripture. He taught children to listen to one another, to be kind to one another, and to treat others the way you wanted to be treated. He taught them to love.

The 2019 film A Beautiful Day in the Neighborhood — which began streaming on Hulu June 2 — tells the story of Rogers through the eyes of a cynical magazine writer, Lloyd Vogel, who lands an interview with Rogers with the assumption he is a phony. The tables quickly turn when Rogers displays kindness to Vogel and even pursues a friendship, rightly believing the journalist has hidden hatred in his heart that needs healed.

The film stars Matthew Rhys as Vogel and Tom Hanks as Rogers, and is one of the most uplifting films you’ll ever see — especially during our divided times.

After all, Rogers, as an ordained minister, was modeling the words and actions of Jesus. He viewed his television series as a ministry.

What if we applied Mister Rogers’ lessons to our current crisis? What if we listened patiently before we spoke? (As Rogers does so often in the film.) What if we assumed the best of people — and not the worst? What if we put the needs of others before our own?

Even if you don’t have Hulu, the film can be rented for a nominal price on major platforms. (I subscribed to Hulu as part of the Disney Plus/ESPN+ package, which gives you three platforms for the price of two.)

E.T. the Extra-Terrestrial (Netflix) — It’s the classic Steven Spielberg film about a boy who befriends an alien. The film is filled with life lessons, including ones about friendship, love and the wonders of childhood. I watched a sanitized version with my kids recently, and we also had a worldview discussion about aliens. Rated PG for language and mild thematic elements. June 1.

Garth Brooks: The Road I’m On (Netflix) — It’s a two-part documentary about one of the most successful singers in the history of country music. His wife, Trisha Yearwood, is also featured. Rated TV-G. June 2.

I Still Believe (Hulu) — A Christian singer demonstrates the true meaning of love when his wife develops cancer. It’s based on the true story of Jeremy Camp and his first wife, Melissa. Rated PG for thematic material. It landed on Hulu in May.

All Dogs Go to Heaven (Netflix) — A con artist canine gets a second chance at life when he develops a friendship with a little girl. Because of some intense scenes, this one may not be for small children. Rated G. June 1. Animated.

The Liberty Story (Disney Plus) — It’s a 1957 documentary about the Revolutionary War and the founding of the United States. Due to scenes depicting violence, it may be best for older children. June 12.

Schoolhouse Rock, Season 1 (Disney Plus) — If you’re a child of the 1970s or 80s, then you likely learned a lot about U.S. history and government with these catchy cartoons and jingles. Now you can show them to your kids. June 19. Animated.

Michael Foust has covered the intersection of faith and entertainment for more than 15 years. He is the husband of a wife, Julie, and the father of four small children.

NCV Exclusive with “I Can Only Imagine” Co-Director & Co-Writer, Jon...