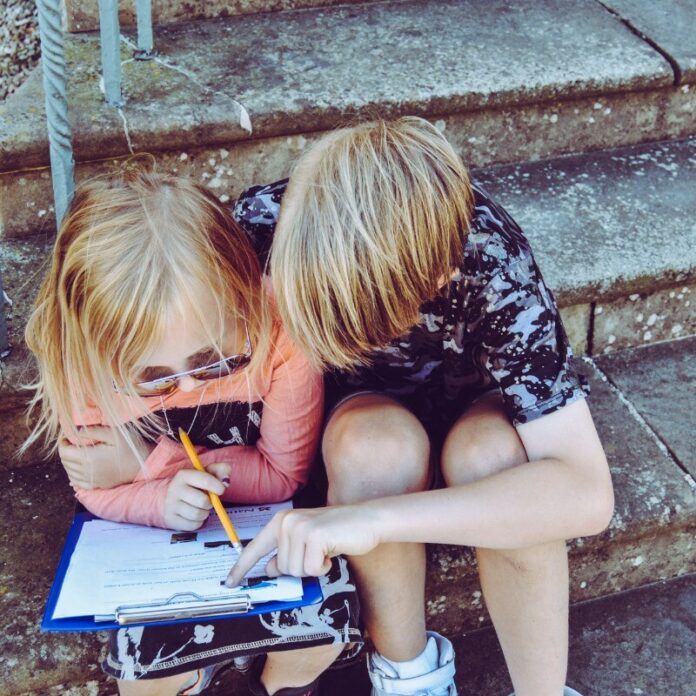 As someone who has been around the homeschooling community both in real life and online for the past eight years, I’ve come across some real whoppers about homeschooling.

While those of us who actually know what this life is all about may roll our eyes at these falsehoods, they can actually pose a real problem for those who are either considering homeschooling or who may have just started.  (I made a YouTube video about this here.)

I can’t even begin to count the number of times I’ve had people approach me who are second-guessing their decision to homeschool based on rumors or unintentional falsehoods that are being perpetuated by those who have never homeschooled, never been homeschooled, and never known anyone who homeschooled.

Today I’m going to clear up some mistruths that I either hear most often or that are simply the most ridiculous. Here goes.

10 Lies About Homeschooling You Need to Ignore

1. Homeschoolers must follow the same laws as public school.

I think this notion began circulating because of the confusion between cyber schooling and homeschooling. Since cyber schoolers and, very often, cyber school programs refer to themselves as homeschoolers, this can be very confusing to those who don’t understand that they are two different things.

Yes, cyber schoolers are bound to the same regulations as public schools because that’s what they are- public school at home. Homeschooling, however, is accompanied by an entirely different set of laws.

That’s one of the ways you can tell the difference between the two. 😉

I’m going to admit, being that it is 2019, I thought that the most “out there” accusations about home education had stopped, but apparently, I was wrong.

Last night, I happened upon a blog post that referred to homeschooling as a “plague” and asserted that homeschool parents don’t teach their kids to read or write.

This shouldn’t even surprise me considering that I once had a neighbor ask my then-12- year-old daughter if she could read, and then follow up by handing her a book that he said he was going to quiz her on.

Maybe this idea comes from the fact that many homeschoolers allow their children to learn to read at their own pace, which means that some homeschoolers learn to read later. To be honest though, after reading that post, I’m convinced there are simply people out there who have a vendetta against the homeschool movement and will say anything to discredit it.

3. Homeschool parents don’t bother teaching their kids because they’re too busy waiting for the rapture.

I kid you not, this was mentioned in the same blog post I spoke of earlier.

I don’t even want to dignify this ridiculous statement with an answer. Don’t get me wrong. I am a believer and do believe this will happen someday, maybe in my lifetime, maybe not, but that doesn’t affect my responsibility to teach my children.

I honestly have no words for this one. Sigh.

I don’t even know what this means. I’m guessing it might stem from the fact that most homeschoolers don’t learn in a textbook/lecture/classroom setting. But even if that’s the case, don’t people realize how poorly that set up actually works?

Homeschoolers have the benefit of learning in a way that suits them best. They aren’t forced to fit in that cookie-cutter mold that only really fits a select few.

If anything, I think that’s better, don’t you?

I mean, really. It’s not like homeschoolers have the market on weirdness. If you would go to the mall right now, pick out the person you thought was the most “unique,” and ask them where they went to school, odds are they’d give you the name of a brick and mortar school- not a homeschool.

And to be honest, I say that if your kids are weird, embrace it. Homeschooling allows children to be the people they truly are. Without the worries of peer pressure and societal expectations, homeschoolers really do have the benefit of being individuals instead of followers.

6. Homeschoolers don’t know how to interact with people outside their families.

This is another one I really have to shake my head at. This isn’t the 1980s. Homeschooling is widespread, so I’m sure most people realize that homeschoolers aren’t locked up in their houses all day.

Yet this lie perpetuates…

In our society, I’ve found that people are getting more and more to the point that they’ll parrot what others have said without actually thinking about it. It’s like you mention the word “homeschool” and an alarm goes off in people’s heads:

They don’t think about what they’re saying. It’s just an automatic reaction, like when someone sneezes and you say, “Bless you.”

Beep! “But what about socialization?!”

Homeschoolers have neighbors, friends, and acquaintances. They interact with people at the grocery store, bank, and art class. And, unlike a traditional school setting, they actually get to talk to and hang out with people of all ages, not a classroom full of kids their own age who they’re not even supposed to be talking to.

This is the 21st century, so, again, I’m shocked that this is still an issue.

Yes. Homeschoolers can get into college. In fact, many colleges seek them out because homeschoolers have been educated in such a way that, simply put, they know how to learn.

Let’s put this one to rest. Pretty please.

8. Homeschool parents must be hiding something.

As I was browsing online the other day, I discovered that there is actually a coalition of people who are trying to make homeschooling laws more strict. They cite instances of child abuse in homeschooling households.

Okay. I know that there are some disturbing cases involving homeschooled children, but the vast majority of child abuse cases involve kids who go to public school. Not only that, where is the coalition striving for tighter regulations for the public education system to combat all the instances of:

Where is the outcry over this??

So, no. Homeschool parents are not hiding anything. We simply want to raise and educate our children, as is our God-given right, without government interference, because let’s face it….

A couple of years ago, I read a comment somewhere that stated that the reason people homeschool is because they’re too lazy to get up and get their kids on the bus.

I’ll admit that I’m not a morning person and enjoy not having to wake up at the crack of dawn, but who in their right mind believes that getting your kids on the bus is somehow harder than caring for your kids all day long? Not only that, but there’s the added mess, the extra dishes, the day-to-day bickering, and, oh yeah, the teaching!

10. Homeschooled kids don’t get to experience the real world.

Oh, good gravy. How is sitting in a school building for seven hours a day “the real world??”

I’ll tell you. It’s not. It is a simulation of the real world and a poor one at that.

This is another talking point that sounds off the homeschool alarm.

Again, how is it not obvious that when kids have the opportunity to live and engage in the community around them each and every day, they are the ones in the real world!

One point people love to bring up is adversity. (Watch my video on adversity here.) I just want to let you in on a little secret.

School isn’t the only place where you find adversity!

There’s no possible way anyone could be out and about every day without having to deal with negative issues every now and again. My daughter works in retail. She faces adversity daily. My kids play with the neighbors. Believe me, they run into problems with them all the time. Unfortunately, adversity knows no borders. You find it everywhere.

Homeschooling is an amazing and beautiful choice to make for your family, so here’s the takeaway on today’s post:

Do not ever ask for or accept homeschooling advice from someone who has never actually done it (no matter how good their intentions are), because chances are, you may be misled.

Have you heard any other falsehoods about homeschooling? Leave a comment!

Divine Inspiration and the Bible Attribute to Founding of Berry College...

Surprising Things You Can Expect From a Christian Writers Conference